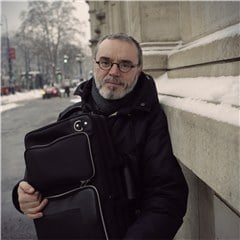 Born in Palermo, Riccardo Crocilla moved with his family to Genoa, where he commenced his clarinet studies at the Paganini Conservatory under G. Laruccia. After graduating cum laude at an early age, he worked with Giuseppe Garbarino and Thomas Friedli. He won first clarinet positions in the symphony and opera orchestras of Cagliari, Genoa, Trieste, Lausanne and, since 1996, is Principal clarinet of the Maggio Musicale Fiorentino Orchestra of Florence, under the direction of Zubin Mehta. He has also performed with the Orchestra of Italian Radio and Television (RAI), the Chamber Orchestra of Padua and Veneto, the Israel Philarmonic Orchestra, the Parma Opera Ensemble, the Filarmonica della Scala, and the Orchestra of the Accademia di Santa Cecilia, under the direction of the world’s leading conductors.

One of the highlights of his career as a clarinet soloist was his performance of the Mozart clarinet concerto under the direction of Zubin Mehta at Palazzo Vecchio in Florence, as well as the premiere of Sofia Gubaidulina piece “ Warum “ for Flute, Clarinet and Orchestra at the Emilia Romagna Festival, Mittelfest and Ljubljana Festival. Mr. Crocilla is a holder of the prestigious Premio Galileo 2000 award as the outstanding young Italian performer.