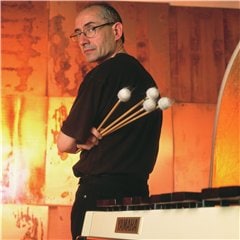 The French percussionist and marimba player, Jean Geoffroy, studied at at the Conservatoire National Superieur de Musique de Paris where he won first prize in percussion in 1985.

After his studies Jean Geoffroy was solo timpanist of the Ensemble Orchestral de Paris from 1985 to 2000. As soloist with the contemporary music ensemble Court-Circuit adviser for composer students at IRCAM, he has managed to blaze a personal trail for himself in the percussion world, which led him to create and play many different pieces. This has led him to inspire and play numerous new works, and he has been the dedicatee and first performer of scores for percussion solo by many of today's finest composers.

In 2004, Jean Geoffroy created the play by Thierry de Mey's Light Music for "head solo" and interactive Scene Music Festival in Lyons. This collaboration with Christophe Lebreton Grame and opens up new perspectives and allows him to consider other spaces and other directions in his career as a soloist.

Also in recent years, Jean Geoffroy activity conductor who led him to directing various ensembles in France and South America in particular with the ensemble of the National University of Bogota, with whom he has performed works by Pierre Boulez / K. Stochausen / H. Vasquez.

Always ready to perform new pieces or to present the repertorire that he perfectly knows, Jean Geoffroy participated as soloist in nearly thirty recordings, including five recordings of J.S. Bach (2 CD’s of Bach Cello suites, Marim'Bach, etc.) and set of the complete suites and partitas written sonatas for solo instrument, Attacca praised by music critics on its release and Monodrama published in 2006.