Salem, OR-based Willamette University, which prides itself on “being a community of collaborative educators,” recently opted for new collaborative technology in its effort to adapt to COVID-19-imposed changes. Prioritizing the health and safety of its staff and students, the school reduced its classroom capacities, modified their layouts to maintain social distance, and expanded its HyFlex learning model. All these efforts required a high reliance on and creative use of technology, especially videoconferencing supported by high-quality audio.

The school has offered flexible learning models for many years, but with the pandemic, it required a greater number of classrooms to adhere to new safety guidelines. To meet this need, former event spaces and a theater were turned into makeshift classrooms. Although these spaces would be temporary, they had to sound just as good as their dedicated classrooms with installed AV systems. With video provided with PTZ cameras, the school sought an equally easy-to-install audio solution to match.

To meet these new needs, Douglas Wenger, manager of technical support services, specified the Yamaha YVC-1000 Microphone and Speaker System based on past experience with the product.. More than five years ago, the school had a student who had utilized a remote transcriber for class that required the audio be picked up and delivered to the transcriber over audio conferencing. Wenger’s AV specialist had discovered the YVC-1000 after attending InfoComm.

The Zoom-certified Yamaha YVC-1000 features a separate intelligent microphone and full-range speaker unit that can be placed close to a display for naturally blended audio and video to facilitate full far-end comprehension. Yamaha's adaptive echo cancellation and other sound processing technologies help enable a stress-free conversation.

“We first tested the YVC-1000 in our shop where we have this big fan,” Wenger said. “When we turn that fan on, it gets really noisy. The YVC-100 cancelled it out. I don't expect a fan right next to a mic to be able to cancel out that level of noise.”

Because the YVC-1000 allows for up to five microphones to be daisy-chained, it’s able to pick up the audio around the room or table. Another benefit is that the technology staff could tailor the number of mics used and where they were laid out within the room to optimize the audio for the room size and shape. The school deployed 36 units across 32 new HyFlex classrooms. Depending on the size of the room, spaces were equipped with three, four, or five microphones. The speakerphone’s scalable architecture made it well suited for turning the former event spaces, as well as a 125-seat theater, into high-quality hybrid classrooms in under an hour.

“Surprisingly, the theater room, though it’s a large room, sounds amazing,” Wenger said. “We set up four mics in the first row and every other row going up in the center. We were in the back corner of the room talking with our normal voice and the person on the other end was hearing us as clear as could be.”

During a training session for instructors, the system was setup alongside the school’s existing audio conferencing solutions in order for them to learn all the systems at once. The session was in one of the school’s most acoustically challenging buildings. The room features 12-foot-high ceilings, floor-to-ceiling windows, and no acoustical tiles to help control the reverberation. The YVC-1000’s auto-tuning measures and algorithms were able to analyze the room environment and intelligently tailor the acoustic settings to the optimal level for the room. The automatic system warnings helped to ensure the microphones were well placed for optimal audio quality.

The professors saw a noticeable difference in audio quality between the YVC-1000 and other products in the room. For the technology staff, its plug-and-play nature and auto tuning allowed them to set up the audio in under 45 minutes and focus more time on setting up the document cameras and PTZ video cameras.

In addition to natural-sounding audio quality and ease of deployment, the new speakerphones require almost no input from the instructors. For rooms with an in-room PC, they can just get started. If they’re bringing in their own laptop, they simply plug the USB cord of the dock that the YVC-1000 is connected to into their device and they’re ready to launch Zoom.

The YVC-1000 is also capable of being paired with two external speakers and other microphone systems via an input jack. This gives Willamette a scalable design that will allow the school to redeploy the solution when it no longer needs surplus hybrid classrooms. For example, they can install them in Willamette’s conference rooms needing better mic coverage. This is a cost-effective, flexible alternative to installed audio solutions. As a result, the school has a much greater return on investment.

As increasing priority is placed on audio in the classroom, the YVC-1000 answered the question of how Willamette could help remote students feel as if they’re in class. Although hearing the professor is essential, the arising trend is ensuring far-end participants hear the questions and feedback between students in the classroom. With the YVC-1000 in place, remote students don’t have to worry about ever missing the conversation and professors don’t have to spend time repeating questions to ensure that everyone heard them. 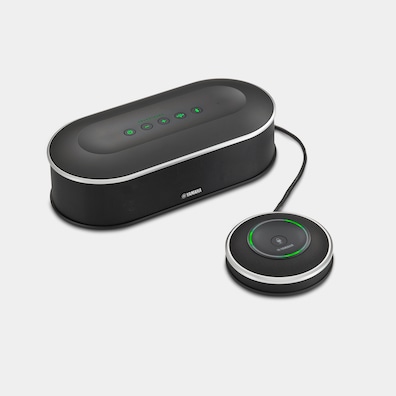