Such is the power and deeply affecting nature of music that it often takes some time to make sense of its hold and where it’s going to take you. So while not everyone gripped by its spell is going to make it as a world-class musician or a superstar, there are those who recognise its influence and how it can be used to make waves beyond pleasure and entertainment and into areas including health and healing.

Rosie Axon, the founder and managing director of the Chesham-based Chiltern Music Therapy trust, is a case in point. About to celebrate its tenth anniversary, Chiltern is an award-winning, not-for-profit organization specializing in music therapy. Among its many specialist and evidence-based music therapy services, the trust provides Neurologic Music Therapy (NMT), MATADOC (Music Therapy Assessment Tool in Awareness for Disorders of Consciousness) and Neonatal Music Therapy Services. Employing the largest team of music therapists in the UK, Chiltern’s services extend beyond its Home Counties base and stretch out as far as the Midlands, the North and the Southern coast of England.

“When we started 10 years ago, we were very much trying to prove the efficacy of music therapy,” explains Rosie. “It’s an allied health profession, so we sit alongside speech and language, and occupational therapy and physiotherapy. A lot of people are really surprised by that because it has the word ‘music’ in the title, whereas speech works with verbal communication and physio works with movement. With music therapy we work with everything from emotional well-being through to physical difficulties through to speech and communication.”

To speak with Rosie Axon is to encounter a genuine force of nature. Her dedication to music therapy is evident throughout and it’s impossible not to get swept up in her enthusiasm and belief in what she does and achieves. Here is someone who makes a serious difference to those whose lives have been dramatically altered by life-altering health issues.

But what is it that’s driven her to this point?

Born in High Wycombe in Buckinghamshire in 1981, Rosie connected with music as a young child, though the route to her current destination would prove to be circuitous yet ultimately rewarding.

“Both of my granddads were quite prolific pianists and organ players, so there was quite a lot of live music in the family,” she recalls. “My brother is a very good jazz musician and my mum plays a bit.”
Taking up piano and the flute at an early age, Rosie found herself frustrated at not to be able to explore the joys of playing music with others beyond the confines of the school orchestra.

“I didn’t get the chance as a teenager to join a band or do any of that stuff until I got to university in Liverpool, which is where a whole host of opportunities occurred,” she says.

Studying English & Music, Rosie soon recognised that her dedication to playing the piano fell short of the standard required of a concert pianist.

And yet for all that, the music bug just wouldn’t let her go.

Realising that music was an integral part of her life, she had to figure out her place within it if performing was no longer an option. And so, having worked for the Guild Of Students in the live music sector – she helped put on Coldplay in Liverpool in the early stages of their professional career – Rosie became a music publicist, an experience that proved to be less than edifying.

“It was like I was using the music industry in some way but, interestingly, it was that experience that demotivated me a little bit,” she sighs. “By the time that I was in my early 20s, I found it ever so soul destroying. And also, being a female in the live music industry, it wasn’t the most even of playing fields. So I ended up thinking, what’s this all for? I’ve spent all this time being involved in music and what for? I felt a little disillusioned after that, so I moved to Spain for a few years to figure things out.”

It was this move that began to unlock the puzzle of where she was to fit in within music. Volunteering with local educational groups in Spain, Rosie set up some English and Spanish music classes for pre-school age children. Returning to the UK, she volunteered with the progressive and inclusive theatre group, Chicken Shed, as well as working for the support group, Help Musicians UK, that aided musicians who’d fallen on hard times. Indeed, it was her efforts with the latter group that opened her mind to new possibilities and opportunities.

“That interest in things really brought me into that side of actually seeing that here’s that whole range and spread of people in our society and that different people need help at different times,” says Rosie. “That felt like a really good connection.”

While Rosie’s time with Help Musicians UK helped her save up much needed funds in order to study for an MA in Music Therapy at Anglia Ruskin University, her mother’s experiences as a social worker and counselor helped Rosie unlock another part of the puzzle.

“She had a client whose young son was autistic,” explains Rosie. “The mum had commented that she couldn’t believe what an impact music was having with her son, in terms of helping him communicate. And for whatever reason, that had always stuck with me. I did some volunteering with local groups using junk percussion sessions for young adults with disabilities.

“I was like, ‘this is interesting - I’m using my musical skills to help people!’”

It was at this point that Rosie realised where she was heading. The puzzle was beginning to open up.

“It suddenly felt like it all clicked,” she smiles. “I was thinking about doing social work. I wanted to support people and then, when I looked into music therapy, I said, ‘this is great! All those years of practice and playing, I haven’t lost all of that experience!’ Here was a way I could use that to support people.

“At the point that I got onto the master’s degree, I was definitely thinking that this was where I wanted to be - it felt right.”

That feeling of making the right move at the right time was confirmed when Rosie took up a post at the Royal Hospital For Neuro-disability in Putney in South-West London. Not only did she get the chance for additional training but, as a newly qualified music therapist, she also experienced what she credits as a life-changing event.

“It was my first time of working with patients in a coma or disorder of consciousness, as we call it, and how totally distressing and horrendous that is for the families involved,” she begins. “One of the first sessions that I did with a patient, the family had said, ‘This is the list of songs that he really loves.’

“I had a fantastic manager there called Dr Wendy McGee and she was teaching me about how you can start to entrain with them and entrain music with the patient’s breath and actually see someone’s breath actually slow down. So, although they’re not physically able to give a response, you start to see these changes in the respiratory rates when you match music.”

Rosie continues: “I was playing a Genesis track to the patient and his finger moved. Just a single movement, and I wasn’t sure if that was a purposeful movement or involuntary. I looked over at the mum and she had tears in her eyes. I carried on playing the track and didn’t think much of it and I saw his finger move again. As the session continued, I didn’t see any more responses, so I asked mum afterwards, ‘Are you OK?’ and she said, ‘I can’t believe it! He’s never done that before.’”

As advised by Dr McGee, Rosie understood that determining whether this was a purposeful response or not was something that was going to take time.

“The progress that these patients make can often be tiny, but actually knowing for a family that that person is there in some way and be able to make a connection to a single movement can really be quite profound,” says Rosie. “I think that has always stuck with me and was part of the reason of what seeded me to start Chiltern.”
Upon completing her MA, Rosie’s frustrating experiences of working as a music therapist dealing the bureaucracy of the NHS showed her the need to start Chiltern Music Therapy. All too often she found that music therapy was limited to just one area of expertise and located in one particular hospital or geographic area, while the red tape slowed down the reaction time in dealing with patients.

“You might find music therapists in the NHS but they might only be doing dementia care and in another trust you might find a therapist but they’re only working in learning disabilities or within mental health,” she explains.

Moreover, a large number of cases where being referred for therapy later rather than sooner: “That was the seed of the idea, of saying, ‘Why are people only able to access these services only when they’re deemed bad enough? What if we saw people at home? What if we did travel to wherever they are? What if we had things that ran in the community that people could come along to?’”

Those questions would eventually be answered. Over its 10-year lifetime, Chiltern Music Therapy has expanded exponentially to provide knowledge and experience to cover the complete lifecycle from birth injuries and neonatal intensive care through to end of life attention. And while Rosie and her team provide the best possible care in using music to enrich the lives of their patients, she acknowledges that the power of music still remains shrouded in an element of mystery.

“I think there is something intrinsically unique about the way the brain processes music, so you get the neurological aspect and you also get the emotional aspect,” she explains. “The interesting thing that nobody still knows about is how that emotional connection with music works. It isn’t fully understood, but I don’t think that matters.

“The thing that I like about music is that you could take a track like Barber’s ‘Adagio For Strings’ and some people could listen that and cry and think that it’s such a sad song, while other people will listen to it and think that it’s lovely and relaxing. You can’t tell people how to feel about a song because it’s connected to so many bits of their own life. It’s brilliant.”

What are beyond doubt are the positive changes regarding music therapy that Rosie has witnessed over the last decade. In addition to the increase in awareness of its existence and the power of music, her team has been able to formulate specific responses and actions to a range of challenges that might never have been thought possible.

So which of Chiltern Music Therapy’s achievements is Rosie the proudest of?

“I would probably say the team that we have,” replies Rosie with no little pride. “They’re very much like a family. Having musicians and therapists together is quite a unique thing to have because everyone is naturally empathic and everyone naturally considers the feelings of others.

“We’re working with difficult people and people who are at the margins of society. What the team is able to do is the biggest achievement.”

And in doing so, Rosie Axon and the rest of her colleagues at Chiltern Music Therapy can look forward to many more years of being able to make waves by using music to improve the quality of their patients’ lives. Such is the power and deeply affecting nature of music. 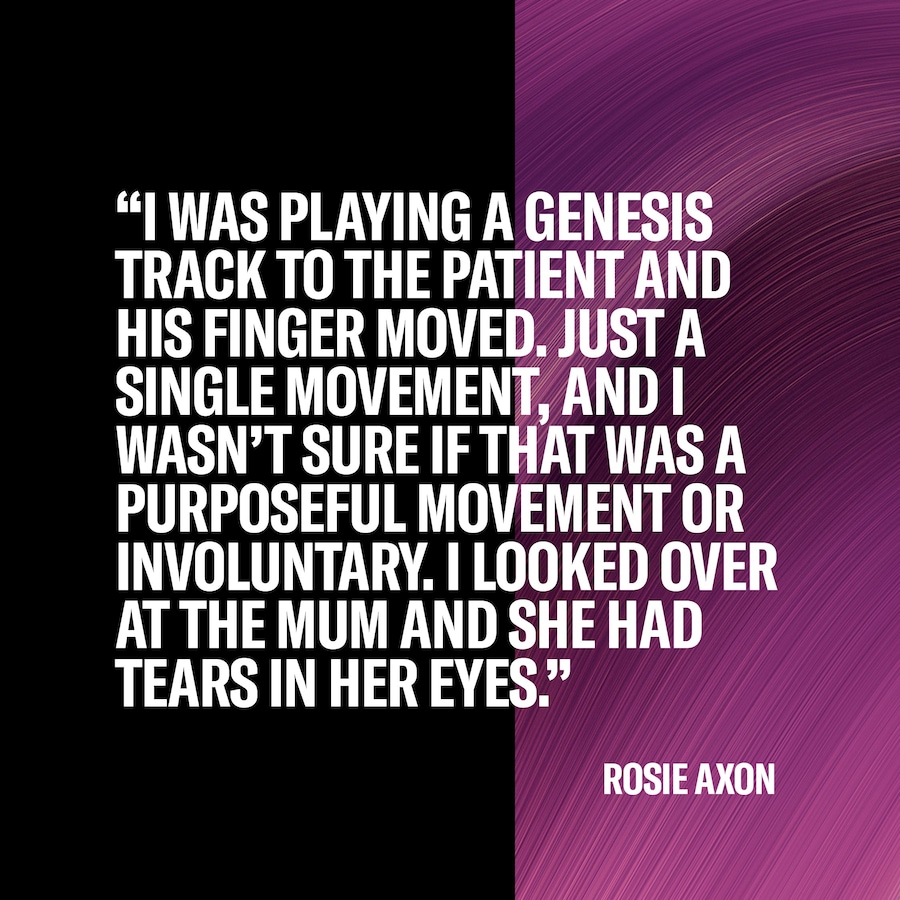