It’s often said that there are far more talented musicians than opportunities for them to perform professionally. There are probably more capable graduates emerging each year than ever before, all striving to enter an increasingly competitive and oversaturated music industry. If so many musicians are replaceable - by virtue of their calibre - I believe one quality that sets the best apart and keeps them booked is professionalism.

I feel that in music, professionalism actually refers to several different things. I want to explore a few aspects that I think to be important. This is by no means an exhaustive list, but a few areas that have made sense to me since entering the profession. A quick google search defines professionalism as “the competency or skill expected of a professional”. If we apply this thesis directly to music it might seem a superficial description: one that focuses only on the technical or musical qualities of a performer. With the industry’s current high standards, we can almost take calibre for granted when we talk of professionalism. I believe it encompasses much more than this.

The first and most blindingly obvious pillar of professionalism is that you should be prepared to play the music that is asked of you; at an equal level to the colleagues that will play alongside you. We live in a time where it’s possible to locate and listen to dozens of recordings of most works in an instant, or access a wealth of scores for free. Previous generations of musicians had to spend great deals of time and money to find their materials before the first rehearsal, so there’s now almost no excuse to not have the music prepared. If it’s a brand new piece of music with only the score to help you prepare, you can literally google the word ‘metronome’ and be presented with such a device for free on your computer’s screen. Being well prepared for a rehearsal means that you can spend more time enjoying how you play the music, rather than being stressed about learning it on the go. Good preparation extends to your instrument-specific materials as well. Suppose you have only one barely-working reed the day before a rehearsal and suddenly a change in humidity renders it unusable, the blame rests on you for being underprepared, not the weather!

Punctuality is another really blatant practice that still eludes many people. If you have a rehearsal at 10 o’clock and you know that in the worst case scenario of cancelled trains and bad traffic it take an hour to get there, allow an hour and a half. Get into the habit of enjoying the stress-free ‘me time’ being early grants you - treat yourself to a coffee, knowing that you can warm up your instrument leisurely on your own terms. Of course, the unexpected can happen with lateness even when you’ve left for a rehearsal with the best intentions - a broken down train or a personal emergency for example. All reasonable managers or colleagues will understand that these things can happen to anyone; just let the relevant person know that you’ll be late or absent with as much notice as possible. Punctuality should extend to general communication, too. If a fixer engages you for some work, reply to them as soon as you’re able to. Keep in mind that they probably have about 100 times the emails to tend to than you do.

Respect in the room -

This is a more grey area of professionalism. Of course, courtesy or empathy should be second nature, but they can be less understood in a professional setting as they are not qualities that are officially taught: people are expected to pick them up in the ‘school of life’. They certainly come to some more naturally than others. In a professional musical setting, this is about understanding the feelings and sensitivities of the various personalities you are working with. An obvious example:

don’t sit next to someone in orchestra and practice their solos in the rehearsal break! Even if your intentions are not competitive you will never come out of this well! Another: if you don’t rate the playing of someone else in the ensemble, don’t air your negative feelings publicly. If it gets back to that person, they’ll feel affronted and self-conscious. Playing is bound to our identities, after all, and you will be viewed as something of a bully. In my first orchestral job, I saw a relatively new member behave like this. That person lost friends very quickly.

Alternately, if you have the opportunity to compliment someone’s playing because you genuinely enjoyed it, you should do so. Playing exposed parts can be stressful, and praising someone can give them a nice lift and add to a good atmosphere in the room. Needless to say, don’t flatter someone gratuitously. Sycophants are annoying and transparent.

If you have a constructive point to make to a colleague, you should favour diplomacy over an “I’m right, you’re wrong” approach. If you back someone into a corner about how they’re playing something, they’re unlikely to play that same passage freely and with confidence (some conductors could do well to remember this too!). Also remember that if you’re a guest or occasional visitor to a group, seniority and experience count for a lot and should be respected. If you feel a colleague could improve on a passage, give them the space and time to do so, just as you would expect for yourself.

There are some more nuanced types of professionalism as well. Here’s an example of the sort of courtesy I mean: in the orchestral scene here there is a nice culture of buying a round of teas or coffees in the rehearsal break - or drinks after a concert. It makes sense for one person - in rotation - to buy three or four coffees (or pints) for their whole section: it saves a long queue in the break. It never goes unnoticed when someone manages to evade their ‘round’ several times in a row, sometimes accidentally but sometimes from sheer stinginess. If you truly cannot afford to buy three coffees, it’s important that you clarify that your wallet is light to the relevant people: they will understand! Otherwise, enjoy giving your very small token of generosity that makes the lives of your colleagues a tiny bit easier. This probably sounds like something insignificant and unrelated to playing, but it’s all part of being a person that is easy to work with.

As I finish this piece, I realise that there are so many things - obvious and subtle - that make a dependable musician. I’ve left out many other aspects of professionalism, so in general, I’d say let common sense and your best values guide you. 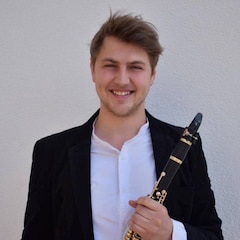 Benjamin Mellefont is the Principal Clarinet of the London Philharmonic Orchestra and has previously held the same position with the Royal Liverpool Philharmonic Orchestra, with whom he also appeared as a soloist. He has also played as Guest Principal with many of the orchestras in the UK and Australia. When not playing clarinet, he enjoys producing electronic music, and can be occasionally found moonlighting as a barista in London coffee shops and markets.